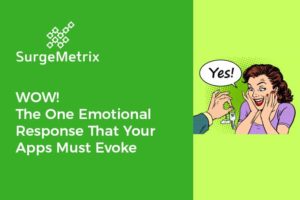 Do you want users to merely accept your app or to fall in love with it?

App developers have priorities that range from making money to making great apps to making users stick around. One goal, though, makes all three possible – making apps that users love.

Today’s crowded app marketplace is crammed with millions of apps so you need to do the right things to get noticed.

In such a saturated selling environment, it’s more important than ever to make an app that is remembered, not dropped because it’s bland, forgettable, or because it performs poorly.

When you design to impress and wow your users, you will have the leverage to achieve all of your goals…but there are two common pitfalls that you can make when you try to stand out from the crowd.

If you can avoid these, and focus on what really impresses users, then you’ll be able to create something that is memorable and lovable.

2 Common Mistakes to Avoid When Trying to Wow Users

Here are a couple of common mistakes that product creators can make when trying to impress users.

Mistake #1: Trying to Please Everyone

Don’t try to please everyone. Do that, says design expert Don Norman, and you risk turning out like Microsoft. “You end up with a bland product that everybody will accept but nobody truly loves.” (Sorry Microsoft.)

Bland isn’t an option … at least, for those of us without Microsoft’s market share. Apps that leave no impression are forgotten and those that aren’t usable are uninstalled. If you are a startup, then being forgotten spells death.

Creating products that users truly love means taking certain risks. Contrasting Apple’s designs with Microsoft’s, Norman said that great design “will really convert people, but it will also put off other people. So you have to be willing to offend people.”

Mistake #2: Being Grabby Instead of Impressive

The second common mistake that developers make is trying to “grab” users’ attention instead of impress them…there is a difference.

Obnoxious graphics, for instance, visually shout at users to pull them in. Banner blindness is the result. This syndrome is old news and is responsible for annoying millions of users and giving rise to ad blockers.

The Nielsen/Norman Group identified other “grabby” behavior in recent years. The exit popup, for example, shows up when users are attempting to close a tab. Instead of impressing users and wowing them, though, it has the opposite effect.

For me, and for many other people, it is just plain irritating.

This type of behavior, claims the Nielsen/Norman Group, will only “chip away at the presentation of a professional, confident website” and “damage users’ perceptions of credibility.”

Even more recent research by the Nielsen/Norman Group showed that site aesthetics can positively impact users’ perceptions of a site – so much so that they are “are more tolerant of minor usability issues.”

The above study brings up several important points around usability and user testing, but the relevant takeaway here is that aesthetics impress.

In short, elegance over extravagance.

You have a choice. You can be a grabby, desperate yes man that blends blandly into the crowded app marketplace, or you can floor your users with an elegantly designed product and websites that they love, remember, and promote.