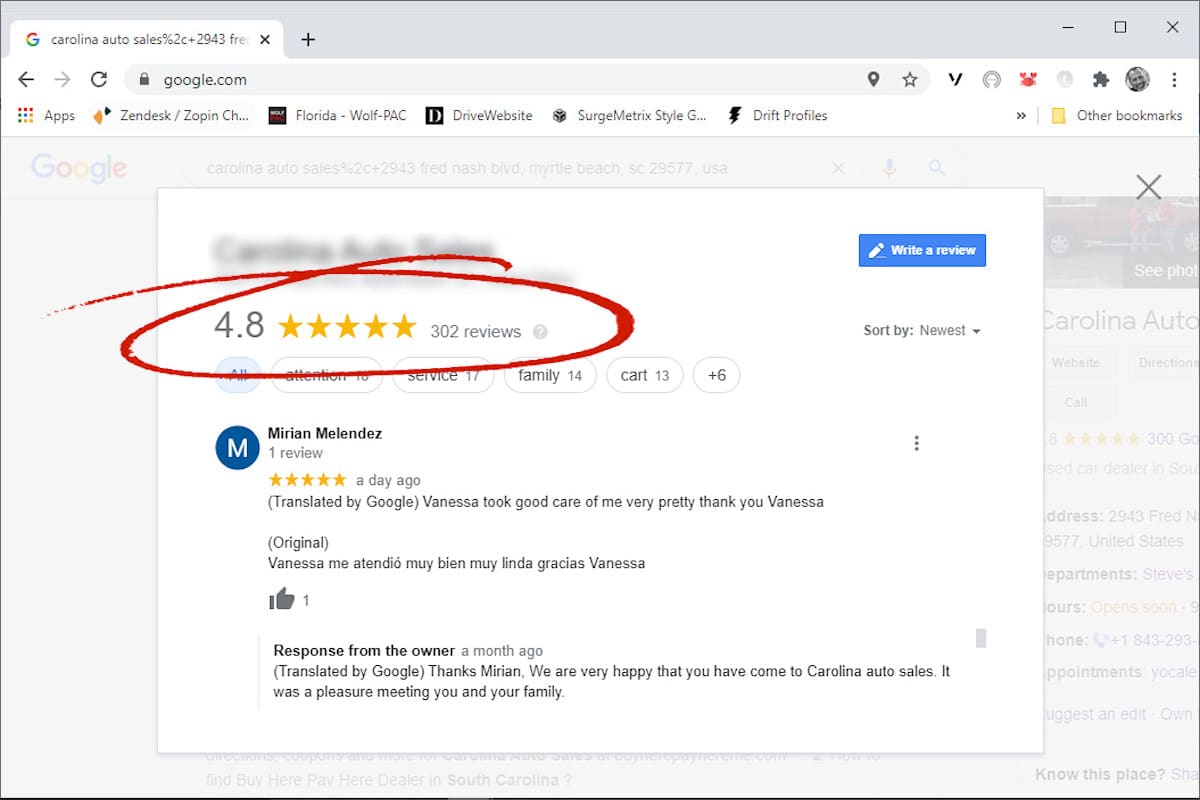 Why Reviews are Important Regardless of the Language

When was the last time you bought a product or service from an online company that had poor reviews?  Never?  I know I haven’t.  If I see a 3 star rating, I keep looking.  I only buy from companies that are rated 4 or better by other consumers.

My online buying behavior is very common given current studies:

But reviews aren’t just important in terms of buyer behavior; they are important because Google says so.  According to Moz, a well known leader in the SEO space, reviews account for around 15% of what Google considers important for ranking local businesses.  So if you’re a dealer who ignores your reviews, you are setting yourself up for failure by undercutting your SEO ranking.

Hey Bud, You Need to Respond to Your Reviews too!

It’s just the quality of the reviews that’s important; it’s the volume, frequency of your responses, and the responses too.  Womply found that businesses earn 35% more revenue when the business responds to 25%, or more, of their reviews.  And Brightlocal showed that 89% of online shoppers read those review responses too.  Finally, according to ReviewTrackers, over half of online shoppers expect to see a review response within a week… so it’s not just that they expect to see reviews, but they also expect you to respond in a timely fashion.

What do these stats tell us?  It’s simple.  You need to respond to all your reviews in a timely fashion if you want to make more money.

¿Disculpe?  You Think Spanish Language Reviews are Important too?

Now it is time to twist this conversation towards the topic of the post.  Most posts like this one will omit a discussion about Spanish language reviews.  Why?  I’m not sure, but I assume that it is because most marketers (and car dealers) don’t yet see the financial value of marketing to the Hispanic community.  If you want to see some data on the $$ value of the community, check out this post that I wrote a while ago.

Why is it important to include Spanish language reviews?  It’s simple: if you have a large Hispanic population around your dealership, then you want to capture their attention using their language.  Having reviews of your dealership in Spanish on Google My Business and Facebook tells the Hispanic community that your dealership serves them as much as the general population.  To be more blunt, good reviews in Spanish can help dealers get more sales.  Let’s look at a simple case study to illustrate this point.

We have a small buy here / pay here dealer in South Carolina that has a small population of over 27,000 Hispanics within 50 miles of their location.  The dealership has two people who speak Spanish on staff and have engaged us to manage their Hispanic marketing efforts.  Even though the surrounding population is very small, they have done exceedingly well at securing sales from the Hispanic community for a variety of reasons.

First, they made a decision to target Hispanic sales and followed through by hiring a company that could help them in that effort.

Second, they respond to their leads very quickly.  No one is left hanging; everyone gets a call right away.

Third, they do a great job walking their customers through the sales process explaining everything at each stage.  This is particularly important for the Hispanic community.  Such guidance builds trust, and trust generates sales.

Fourth, and most relevant for this post, they have worked with us to create a process for managing reviews in general, and generating Spanish language reviews in particular.  How do they do this?  It’s not really complicated.  After they get a sale, they take a selfie or photo with their customer, post it to their Google My Business profile or Facebook, and then send a request for a review in Spanish.

When we started working with them at the end of last summer, they had a 4.2 rating and were in the low 200s for total reviews.  Their Spanish language reviews were few and far between.

Now, as you can see by the image above, they currently have a 4.8/5 rating and over 300 reviews (with many in Spanish).  This puts them above all similar BH/PH dealerships in their area for the number of reviews, their rating, and the volume of reviews in Spanish.  Moreover, their Google My Business traffic accounts for over three quarters of all organic traffic to their website!  Organic and paid leads are up and they are doing quite well.

All of this work on their GMB review cost them nothing except a few small changes to their sales process.

It would be easy for me to talk more, but I will end here with this small admonition.  Reviews play a significant role in Google’s local SEO algorithm and in influencing car shoppers to buy from your dealership.  In addition, most dealers ignore large Hispanic populations around their dealerships.  The simple act of marketing to that population through digital ads and Spanish language reviews can help you add more sales to your bottom line.  Our dealership did this and so should you.  Call us at 954.507.6468 if you have questions.